Thomas Viglianco has been mentioned in a recent article regarding his work with young basketball players: 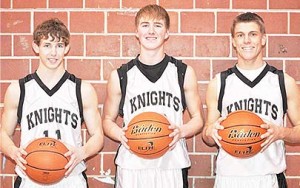 Last summer the Knights, including Bloom and his fellow seniors, put in the requisite time in the gym, though with a twist. Seems as though Hudson’s family knows a guy, a guy who plays professional basketball in Europe (Thomas Viglianco), and he spent time with the Spalding/SPA players last summer, giving them tips and insights to help them become better players.

It was pretty basic stuff but hit home with Bloom.

“He gave us a lot of pointers but one of them was if a defender lays back, shoot it in his face; if he comes up, drive past him to the basket,” says Bloom. Pretty basic, sure, but sweeter words have never heard by a shooting guard, trust me..

"Thomas has continued on his success from our great college battles. I knew he would be a great trainer and motivator for kids and college bound athletes because of his great shooting abilities. It is great to see Thomas helping out the youth. Since college Thomas has been playing professionally overseas and is more than qualified to pass it on to your son or daughter. All the best to Thomas and I know he will do great things on and off the basketball court."

"I consider Thomas an incredible student/teacher of the game of basketball because as a former teammate of his in France, I was able to see the foundation and skill set he had as a player. His willingness and passion to share that knowledge with the young kids and teammates is what makes him unique and easy to play with."

"I would love for my child to have the opportunity to work with Thomas Viglianco. Having known Thomas since his All State High School playing days in Alabama, I have always found him to be a man of character and integrity. His ability to teach and motivate young players is a gift that is hard to find. Thomas was a great player and has transitioned that skill set into being an excellent teacher."
Head Basketball Coach - University of Alabama-Huntsville
One of the best Division II coaches in the country
8 Time Division II Elite Eight Appearances
Lennie Acuff,

“I have known Thomas since he was a 10th grader and saw firsthand the amount of work he has put into the game of basketball. While coaching him as a Division 1 basketball player in college, I saw him blossom not only as a player, but also as a student of the game. As a result of his work ethic, skill, and basketball IQ, he has done what few players have done: achieve a career in professional basketball. I have no doubt that Tom’s communication skills, knowledge of basketball, and experience playing at the highest levels, qualify him to teach the game to young aspiring players who want to improve their skills on the basketball court. I am certain he has the ability to do this while inspiring them to achieve their goals in the process.”

"I have known Thomas Viglianco for a long time and have seen his passion and enthusiasm for the game up close. Thomas has combined his love for the game, work ethic, and basketball IQ to form an outstanding career as a professional basketball player. These qualities, along with his communication skills and knowledge of the game have helped him become a great basketball teacher. Anyone that has a desire to become a better basketball player should seriously consider having Thomas help them reach their goals."

"I know Thomas from when he was a rookie in Italy. First time for him on a professional team in Italy. He was with us just a few months and I was lucky to know a real player and person. His passion and Basketball IQ are very high. He knows the game. He knows how to read the game and to be effective in the game. I absolutely believe he'd be a great teacher about any details on the floor, technical and mental."

"I played professionally with Thomas in the top league in Italy. I have had the opportunity to play and workout with many NBA and Pros from overseas. Thomas, much like myself, has dedicated himself to becoming a student of the game. He pays close attention to details and takes pride in getting better on and off the court. Not only is he a great player but he is a great role model for children. You don't have to run the fastest, jump the highest, or be the strongest to play this game. Being able to utilize your talents and working to get better everyday will give you the opportunity to reach the next level. Thomas is a fine example of this and having your son or daughter work with him will help them obtain their goals on and off the court.”

“Thomas is not only a great player on the court, he is a great person off the court as well. A true role model and leader for our young generation. As a young player in high school, I looked up to Thomas. I wanted to follow his footsteps...getting good grades, working hard to earn a college scholarship, and playing basketball on the professional level. Thomas is a great player and knows the game of basketball very well. It will be a blessing for players of all ages to learn the game under him.”

“I could not recommend a better person and friend to mold our youth to become better people both on and off the basketball floor. I have had the pleasure of working out and playing with Thomas on a professional level. He has always been a professional and knows the game of basketball and more importantly knows how to teach the game of life.”

"I have known Thomas Viglianco since 2000 when I was recruiting him for college. He is one of my favorite players over the many years of coaching because of his passion for the game and talent. His hard work on the court has allowed Thomas to play professional overseas for the last 6 seasons. I hope that kids and parents get to see his true love for the game. Not only is he a great player but a great person and friend."

"I have known Thomas as a friend and competitor on the basketball court for many years. Not only does Thomas have tremendous skill, but he has a wealth of knowledge and a passion for the game."

"I have enjoyed having the opportunity to get to know Thomas. His love and passion for the game of basketball is inspiring. He has given me valuable insight as I have begun my professional basketball career as well as much encouragement. He is a true professional and it would be a privilege to work with him or be taught by him. I wish nothing but the best for him in his professional career on and off the basketball court."

"I know that Thomas will share his passion and understanding of the game with all his athletes. We played against each other when he was at William and Mary and I at VCU. He's a hard worker who has played at the highest level in European basketball. Parents should take full advantage of his services and know that their children are receiving the highest level of coaching."