Welcome to My Blog

My latest posts and updates

It’s becoming all too common to hear stories of young girls and boys getting cussed out and ridiculed on and off the basketball court. Over the last two years of Vigliancohoops training I can easily count over 50+ stories of situations I’ve been told of where young players were ridiculed publicly and privately by adults for their play on the basketball court. I’ve wanted to write an article about this for a long time and I’m finally stepping up to the plate to address these ridiculous actions made by loser coaches and parents!

Being a professional athlete, I would say the number one thing of importance while playing basketball is CONFIDENCE! You can have all the skill in the world, athleticism, and work ethic, but if you don’t have the confidence to make the play in a game it’s all for nothing. In saying that, let’s take a huge step back and look at the 3rd-8th grade levels of basketball development for our youth.

·         When your child is in the beginning stages of basketball it should be as positive of an environment as possible!

·         Players should be able to work through mistakes at a young age! That is how you LEARN!

·         In most cases, true skills aren’t taught to young players until they get to high school, because at the youth level the majority of coaches are parents that NEVER played basketball or played minimally in HS.

·         Many coaches are trying to relive their high school JV glory days and feel cheated by the basketball gods. These coaches feel they owe it to the young players to make it even harder on them because of their shortcomings in basketball.

·         The belief that cussing out players is a good thing is a complete joke!

·         The emotional roller coaster that young kids go through is immense! Factor in puberty and wanting to fit in with their peers, being a young kid is a very awkward time.

·         Expecting a young kid to take constant verbal abuse and be fine with it is a lie! It’s some 48 year old man who thinks “when I was your age I was tough as nails.” Actually no, you were an awkward young kid just like the kid you are now cussing out!

·         Confidence comes from believing in yourself. If you are in 5th grade and nobody believes in you, I’m pretty sure it’s hard for a 5th grader to believe in himself! Kids seek positive vibes and support from their coach!

One of the biggest reasons I held back on writing this article is that I wasn’t sure why parents allowed these coaches to publicly humiliate their children. I have come to the conclusion that parents are afraid of breaking away from the pack, they listen to the wrong people and are afraid of standing up to the coach. Let’s look at two examples below:

1.      There are ten families on a 5th grade basketball team. There are four parents that played high school basketball and the rest of the parents never played. The head coach for the 5th grade team played varsity basketball in high school, but sat the bench his senior year as the tenth man. I would immediately think that no parent/coach on this team has any clue about basketball and should just let the kids have fun because nobody is equipped to teach them long lasting basketball skills. Being a professional athlete, I’m clearly in the minority here in my thinking. In these common occurring cases you have a coach that thinks he knows everything and all he wants to do is win (he wants to regain the glory days and be a winner because he never was). He doesn’t teach good skills to these players, because YouTube videos can only go so far. He yells at players and cusses them out because he can’t get past the fact that he truly isn’t a coach and is a very insecure older guy that knows very little about basketball. It’s clearly a case of a coach cussing out players and making them FEAR him to hide his lack of ability to coach and lead. Let’s all be honest with ourselves, when someone in authority is disrespectful to you, you tend to not focus on his shortcomings, but instead live in FEAR of his mean ways. This leads to parents allowing a coach to rule a team, treat players however he pleases and kids lose confidence playing for a loser of a human being that enjoys seeing 5th graders cry and live in fear on the basketball court.

2.      Many families play together on the same club team for years and establish solid friendships. I believe that some parents become selfish and want what’s best for them instead of their child. A kid between 3rd and 8th grade to have REAL development should be playing on teams where he is getting real coaching, growing as a player, having fun and gaining confidence from being able to learn through mistakes. If you are a parent that is more upset about missing out on cocktail hour on the weekend road trips with other parents than with your own child, I think you need to rethink a few things! It’s about putting your child in a position to grow on and off the court and be surrounded by trustworthy and encouraging human beings. Parents stop worrying about yourself all the time and think what’s best for your child’s growth!

I had a 5th grade kid come up to me a few weeks ago after a shooting workout and told me his coach tells him he sucks whenever he misses a layup in a game. At first I was blown away by the story, but as I dug deeper I found out that this coach was clearly a loser and should never be allowed to coach anything. The kid told me he has lost confidence with basketball and started to get emotional. Are you kidding me?? How is this coach allowed to have a job?? Why aren’t the parents calling out this coach immediately??

It truly disgusts me the way youth coaching has become in 2015. Many of the youth coaches act like they are college or pro coaches without a clue to what they are doing and teaching. Coaches hide their shortcomings with verbal and mental abuse that drains the confidence of young players, practice by practice, game by game. If you are a coach reading this and these ridiculous behaviors in any way relate to you please reassess your approach and realize that you are there to help, not hinder their growth as young players. If you are a parent reading this and have a coach that is like this, please don’t be afraid to stand up for your child and either tell the coach to stop or find a new team. The next time you wonder why your kid is afraid to shoot, not driving the ball, and looks like a shell of the player he once was.. I’m pretty sure it has a lot to do with confidence and the select people that are draining it from him/her.

DISCLAIMER*** PLEASE DO NOT CONFUSE MY MESSAGE WITH THINKING EVERY PLAYER SHOULD BE CODDLED OR GIVEN A CERTAIN AMOUNT OF PLAYING TIME JUST BECAUSE THEY MADE THE TEAM. KIDS HAVE TO EARN PLAYING TIME AND THE RESPECT OF THEIR COACH/PLAYERS BY THEIR WORK ETHIC AND RESPECT ON AND OFF THE COURT!

What are you doing for 2 months? 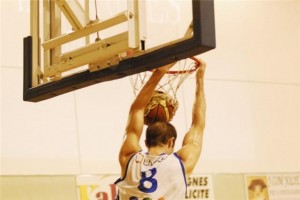 In 2015, the months of May and June are EXTREMELY important for a high school basketball player looking to make a name regionally, nationally or ADD to his/her resume amongst scouts and college coaches nationwide! Recently I tweeted that “The JUMP you make from April to July can shape your entire future!” I have always known this to be true since my early high school days, but after talking with many D1/D2 coaches over the past several weeks it’s apparent the stakes are even higher in the present day of NCAA basketball. The LIVE periods where Division 1 coaches specifically (and all other levels D2, D3, NAIA, JUCO) can watch you play are limited and the amount of camps/AAU tournaments going on during those LIVE April/July periods are abundant. Coaching staffs are spread thin around the country and can’t be everywhere. There are also multiple divisions/brackets at these AAU tournaments across the country, so it’s hard to be showcased or be in the TOP bracket where D1/D2 coaches will usually flock to. At the end of the day, windows of opportunity can be large, non existent or somewhere in between. It’s up to YOU to realize what window you have and prepare accordingly!

The 2 months between April and July LIVE periods have to be a time for self reflection, self discipline and sweat! First, you need to make sure your GRADES are closing out strong in the classroom & you are staying on track for that 3.0 or higher for the year. As I’ve written about many times in articles on Vigliancohoops.com, grades are the #1 or #2 thing a coach asks me about when recruiting a player! If you SLACK in the classroom you eliminate 50%-100% of college offers (depending on how good of a basketball player you are.) This is NOT a joke! Get your grades in check and finish the school year on a high note!

Self reflection is about swallowing your pride, being honest with yourself and realizing what you have to work on in the 2 months prior to July. Ask your coach, trainer, or college coach that is interested in you, what you need to improve to be more marketable. Obviously not everyone has your best interest at heart or knows the game well, so ask someone you TRUST for real constructive criticism.

Self discipline is about spending quality time in the gym! Working on your weaknesses, honing your skills, and going game speed is key over May and June. You have spent an entire high school season and the April month for AAU basketball in a TEAM type setting. The months of May and June are crucial for your individual growth!

Do whatever it takes to improve YOUR game:

SWEAT!! Get your butt in the gym and get in shape! If you walk into your first NCAA certified tournament in July out of shape YOU are the only one to blame. Seeing players out of shape in July makes me sick. How do you think college coaches feel? They’ll spot out an out of shape player in a second and classify you as LAZY!

I truly want the kids in Nebraska to accomplish their basketball goals. I only speak the truth and can’t stress how hard a D1 scholarship (or other scholarships being D2, NAIA, JUCO) is to come by. I know everyone wants or thinks they’ll play college basketball, but the numbers DON’T LIE. Statistics show that only 1%-3% of kids in the entire country will get a D1 scholarship each year. Reality is a tough pill to swallow, but the sooner you realize HOW HARD THIS PATH truly is, hopefully you won’t take any more time for granted and increase your percentages!

THE 2 MONTH CLOCK HAS STARTED!! GET SERIOUS ABOUT YOUR FUTURE!!